Regardless of whether you are a seasoned décor expert, design enthusiast or just a layman looking to add a new layer of visual interest to your home, you must have stumbled upon references to mid century modern style. And this is not without good reason – MCM design has been praised time and time again as one of the most influential design philosophies and aesthetic movements of the 20th century. Rather than saying that its influence still lingers on to this day, we can instead note that mid century modern style hasn’t lost any of its appeal and continues to shape tastes and sensibilities to this day.

The timeless appeal stemming from streamlined forms and simple elegance with a significant nod to Minimalism, Bauhaus, Organic Functionalism, International Style and others is evident not just in stylish mid century furniture, but also in characteristic architecture and artistic expression of the era.

Getting that mid century vibe – is it worth it?

However, aside from all of its stylistic and aesthetic considerations of the mid century style, this design movement is, above all, accessible, practical and affordable – although the latter will largely depend on your intentions and your planned budget. But even if you don’t want to spend a fortune on renovating your house entirely so that it fits mid century modern styles, you can easily refresh your surroundings with some clever décor choices, some affordable accessories and stylish and comfortable reproduction furniture of the era – all that with a limited budget.

In this article, we will discuss different ways you can bring a touch of mid century modern elegance to your stylish home. Some of these ideas will be significantly more than you expect to find and will require significant investments, like in the case of architectural elements, while others might be more in line with the interests of a layman looking to add some stylish touches and give the home a new look.

Ok, let’s be real – it’s highly doubtful you are looking to buy a piece of land and build your little mid century modern paradise from scratch. Not only is this an endeavor which can be hardly accomplished without (ideally) a team of expert architects and designers, but it can also be a more than significant hit on your budget. The cost to build a mid century modern home from scratch is not low. However, by getting a better idea of what is mid century modern architecture and what makes it so unique, you will be able to take advantage of certain architectural elements already present in your home, maybe some elements you haven’t even noticed so far, or at least haven’t thought about them as potential décor gems.

Architecture played as important role in the development of mid century modern aesthetics as did furniture design. On top of that MCM architecture was traditionally viewed as a genuinely American contribution to mid century modern design movement as a whole. Often described as an American take on the legacy of Bauhaus and International Style, these architectural innovations took place under the profound influence of Scandinavian and Brazilian architects. 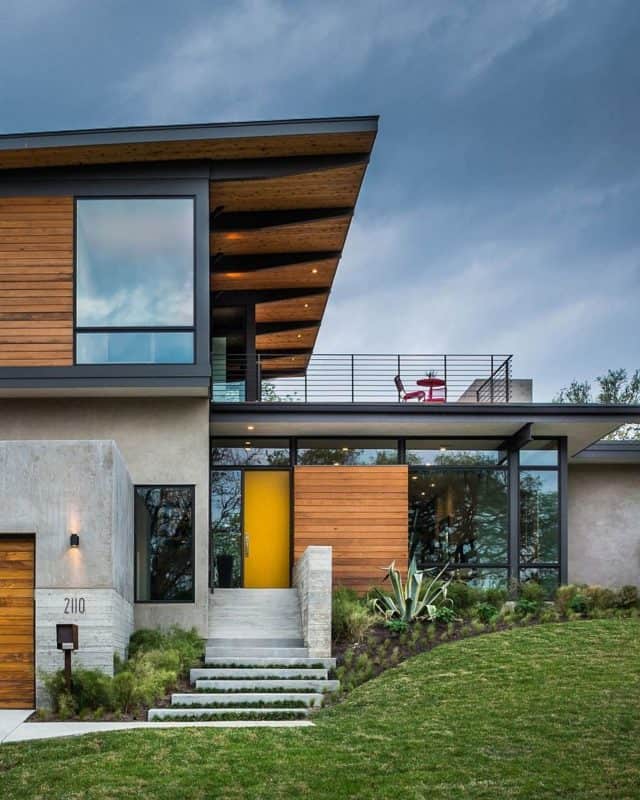 This unique futuristic architectural movement took shape and gained popularities in the decades between 1930 and 1960. Originating in Europe, it was brought to the United States by Marcel Breuer, Walter Gropius, and Ludwig Mies van der Rohe – the same architects that contributed to the significant extent to the establishment of Bauhaus design postulates and principles. With a focus on function and clean minimalist aesthetic, mid century modern architecture playfully utilizes angular structures and open spaces in order to create the specific feel of the era.

This somewhat abstract style based on straight lines and the idea of ‘bringing the outside in’ isn’t afraid of the no-fuss approach with minimalist tendencies ruling supreme here. Functionality is the prime consideration which means that ornamentation is brought down to the minimum. Houses designed in mid century modern style are thus often rectangular – sometimes in rather extravagant, asymmetrical shapes based on precise 90-degree angles – monochromatic in the exterior (although an occasional splash of accent color is not that unexpected).

One of the architectural elements that truly flourished during the mid century era is the characteristic post-and-beam approach to architecture, famous for its ability to eliminate support walls and redirect support of the building to cleverly positioned beams. As the result, architects of the mid century era could replace walls with large windows, sliding doors or glass walls which ensured not only significant illumination of the space with natural light, but also providing the scenic views of the immediate surroundings in line with the idea of bringing the outside in. This is where mid century modern home design gets its unique aesthetic appeal from.

Mid century modern houses often feature large and open floor plans which allow natural light to flood the space. At the same time, the stylistic utilization of these open interior spaces acts as the quintessential design process in the conventional mid century modern home design. So, if you are looking to renovate your home, you might want to consider the removal of some of the non-support walls in order to make your house floor plans more open to light and to stylistic use later on.

Fascination and inspiration by nature have always been a part of mid century modern home design and this is perfectly exemplified in the approach to the exteriors. Many mid century modern houses, especially when they have backyard surrounding them, feature many trees, shrubs and other greenery around them. This all plays well with the idea of bringing the exterior in – on one hand, the large windows or open glass walls (sometimes in the form of sliding doors) should open up the living space to the natural exterior dominated by pristine nature (as much as that is achievable in a more or less urban environment).

As mentioned, mid century modern home design often features a monochromatic exterior with some pops of color. Exposed brick and other architectural elements are also not uncommon as the raw aesthetic of this kind plays very well with the no-fuss approach to architecture so common in the mid century modern approach. At the same time, it also emphasizes functionality as a prime consideration. The colors chosen for the exterior are thus most commonly neutral, natural, unimposing, yet on the brighter side of the spectra.

When it comes to the interior, the situation is rather similar, although more vivid and saturated colors can be found here, most commonly in accent walls and other accessories. In this regard, the rules are rather loose and you can go for complementary colors, three color scheme, and any other combination as long as you keep your vivid accents from becoming too dominant. Remember – form follows function, excessive ornamentation should be kept to the minimum and simple elegance is what should describe the final result. 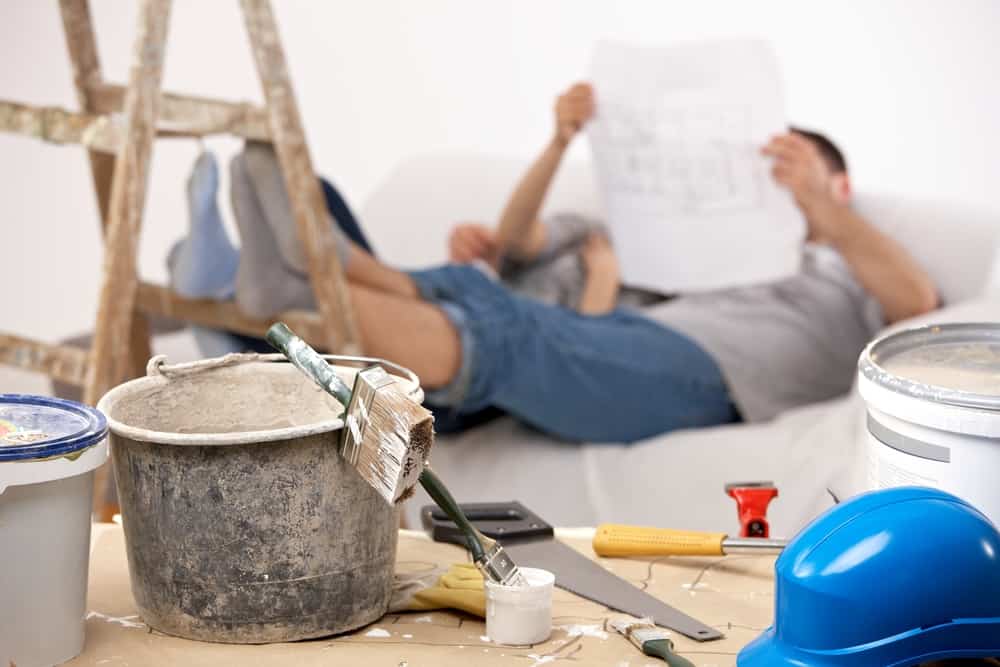 So, you feel like you’re ready to renovate your home in mid century modern style? Let’s make a brief recap of what we went through up until this point. Of course, depending on your budget and the extent of the overhaul you are willing to go to, you might decide to even change or add some architectural elements. If that is the case, you should consider enlarging and opening up the space – both of these can be achieved by removal of non-support walls to either connect two or more smaller rooms into a larger one or to make space for large windows, glass walls or slide doors that can bring the outdoors into your home, offering you some nice scenic views.

On the other hand, you might be interested in freshening up the exterior of your home with a brand new facade in brighter, yet neutral colors or exposed brick. If you are going for the former option (or why not combine both – white-painted bricks seem to be a rather popular option), you can add some color with vividly colored doors that will break up the monotony. This accent color is best used in the interior too, for a truly mid century modern home design.

When it comes to achieving that mid century modern vibe in the interior of your house, the options significantly increase. Not only is décor much more affordable than making architectural changes, but is also much more versatile. Mid century modern interior house design includes a number of different elements – from designer furniture to different accessories and smaller details that can add a new layer of interest and stylistic expression. However, as we have discussed this topic at length in our article on mid century modern décor, here we will not go in too many details.

With the new wave of social and cultural changes in the 21st century, work from home became that much more common and subsequently, the need for a home office became a very real consideration for many. This is one of those situations where mid century modern house design truly comes to prominence – although this design movement reached its peak significantly prior to the proliferation of home offices, it still provides an absolutely perfect solution for this contemporary demand.

With its focus on functionality, mid century modern design is a very suitable approach. You can easily make your home office unimposing, yet stylish, and most importantly, perfectly suited for your needs and demands.

Is mid century modern home design right for me?

The choice of an aesthetic style or any design decision, after all, is a personal decision that is first and foremost rooted in your personal preferences, tastes, and style. So, there is no one who can answer this question for you. However, it is still important to note that mid century modern home design has many things going for it. Its practicality and functionality make it very suitable for small spaces. With a minimalist approach and lack of unnecessary ornamentation and decorative elements, you can easily make the most out of limited space, while still keeping it sleek and stylish. What’s more, the characteristic use of color and play with light will ensure that even small spaces remain fully illuminated and appear brighter, larger and more open.

With this in mind, it comes as no surprise that you can easily find many mid century modern tiny houses throughout the US, with weekend cottages being an especially popular option. With typical openness towards the exteriors that is a quintessential element of MCM architecture, smaller buildings in nature can truly stand out with exquisite style and timeless appeal. Mid century modern beach houses, or maybe by the lake are also very popular and the combination of the stripped down architectural aesthetics with water and surrounding nature can ensure a truly breathtaking scenic view.