Mid century modern design – this phrase is something you must have encountered countless of times if you have any interest in décor. From laymen to professionals and experts in the field of interior design and from magazine covers to internet webpages, MCM style has been praised time and time again for being one of the most influential design styles in modern history that features an aesthetic that looks just as elegant, innovative and sleek as it did back in the 1950s when it first started taking shape.

But, what exactly is mid century modern design? What are its features and what makes it so widely appreciated by the global audiences? In this article, we hope to answer some of these questions and provide you with a deeper understanding of this revolutionary movement in history of décor and interior design.

What is mid century interior design?

As the name implies, mid century style is a specific movement in interior design that relies on the postulates developed and furniture pieces designed in the 1950s. However, there are several things that we have to tackle before we can be completely satisfied with this definition.

For starters, we can say that mid century style isn’t always as mid century as we are led to believe. In fact, many of the core interior design elements featured in this approach have been designed at various different points in time. To name just a few examples, we can mention Poul Henningsen’s lamps and Ludwig Mies van der Rohe’s Barcelona chair and daybed – both collections have been praised as quintessential examples of MCM furniture, despite the fact that both have been designed decades prior to the 1950s.

Of course, these collections are exceptions rather than the rule, but they still showcase an important note, namely the fact that MCM style didn’t appear out of nowhere, but is a continuation of design philosophy that was taking shape in the preceding decades and in other design movements.

What makes up the mid century style?

When talking about MCM style elements, we most commonly think of mid century modern furniture (MCM furniture), but also other décor accessories such as mid century modern art, light fixtures, throws and other decorative elements. But even more importantly, MCM style can be understood by the way that these different elements are combined and brought together in an interior. Most of spaces decorated in mid century modern style combine the minimalist, yet elegant and highly functional furniture designed during the 1950s, natural and subtle tones that gained popularity in the 1960s and the uniquely subtle, yet inviting aesthetic of the Scandinavian design. 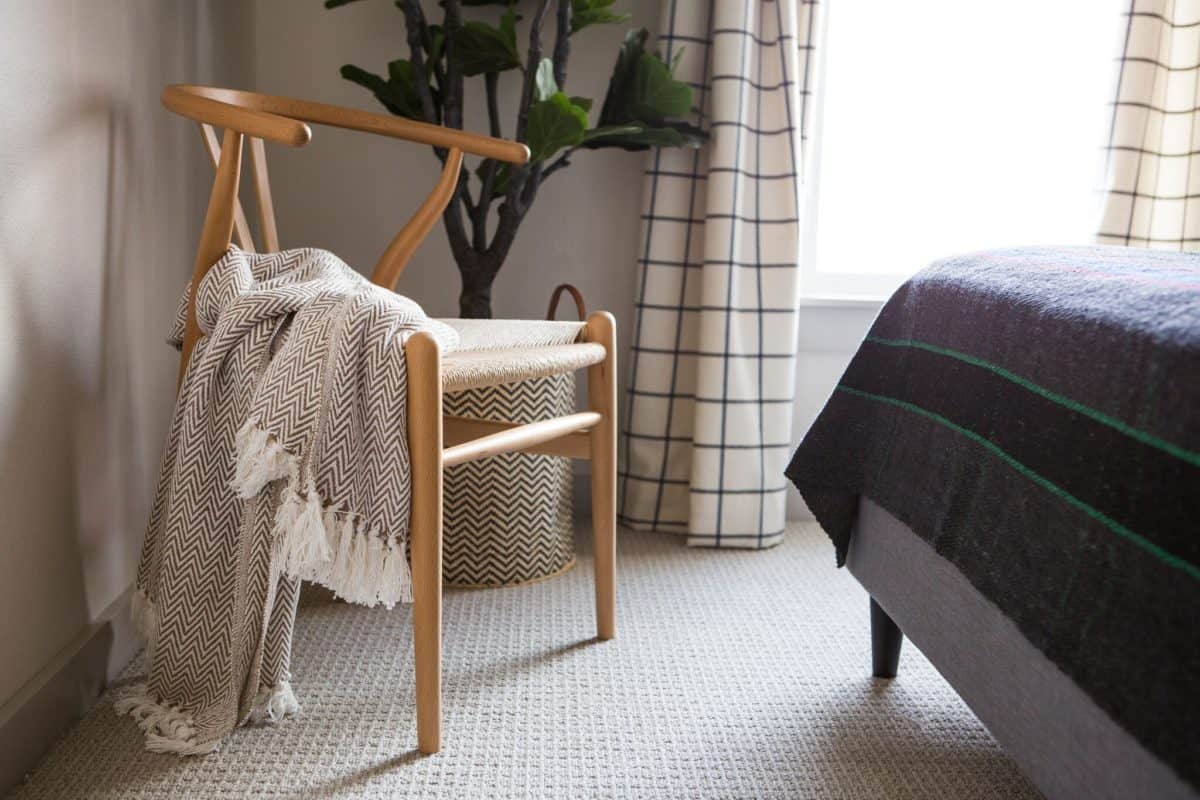 So-called golden age of Scandinavian design spanned the 1950s decade, thus significantly overlapping with the development of the characteristic style in the rest of the world. The two significantly influenced each other which is why it is not uncommon to come across references to Scandinavian mid century interior design which includes both of these deeply interconnected décor movements.

The best way to grasp the elusive essence of MCM style is to start thinking about the lifestyle changes of the 1950s that served as a catalyst for the emergence of this unique design movement. So, on one hand we have Modernism with its affection for new material and industrial processes, on the other we have Bauhaus with its form-follows-function approach and the simultaneously emerging International style with its reluctance towards tradition and affection for experimentation and innovation.

Combine these stylistic influences with the increased prosperity of an individual and the migration from rural into urban environments and you can already sense the spirit of new opportunities and newfound post-war optimism that profoundly shaped the mid century interior design.

The interior design style we refer to as mid century modern did borrow some of the fondness for earthy and green tones, but what profoundly shaped its preferred color scheme is undoubtedly Scandinavian style. With subtle color palette revolving around neutral natural colors and pastels with more vivid accents, mid century modern interior design perfectly exemplifies the idea of elegant simplicity.

In more ways than one, mid century modern interior design was a kind of reaction against the aesthetics of the previous eras. In MCM, you will find no gilt-glamour and decadence with excessive ornaments and details creating an aura of clutter. On the contrary, mid century style is all about simplicity, openness of space with its streamlined expression and embracing of form-follows-function mantra.

The preferred color palettes of mid century modern art and décor perfectly exemplify this by relying on subtle color expression that don’t tire the eye, while using bright and vivid accents to emphasize what really matters. As opposed to previous eras, mid century modern is all about balance, subtlety and simple elegance.

Arguably the most recognizable, most famous and most central element of mid century modern style is the characteristic furniture developed during this era. With organic shapes and forms whose unique and elegant aesthetic stems from simplicity, but also exquisite fine craftsmanship without which much of those designs would be impossible. With contributors from all over the world, mid century modern furniture design remains tightly connected to European traditions of Scandinavian design, German Bauhaus, but also worldwide trends of Modernism and International style.

Some of the most influential furniture designers of the period are big names of furniture design such as Arne Jacobsen, Poul Henningsen, Eero Aarnio, Eero Saarinen, Harry Bertoia – mid century furniture designers who used their flair for innovation and their exceptional talent to create modern and functional furniture that is nevertheless rich in aesthetical expression and stylistic value. 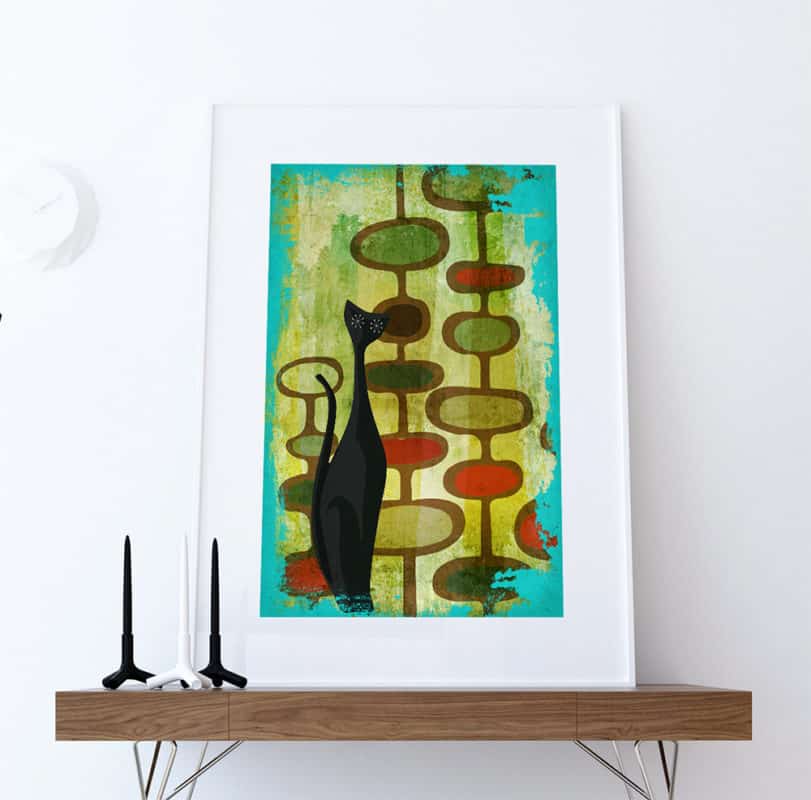 What better way to make your home a truly unique expression of your personality than with some cleverly chosen art pieces that reflect your taste and sensibility. Despite its somewhat stripped down and streamlined aesthetic, mid century style is no stranger to art. However, it does have somewhat different attitude to it than in the previous eras.

Mid century modern decorating ideas often include certain art pieces of various kinds. The diversity of their forms is an especially important point here so you are encouraged to think out of the box.

When it comes to paintings (and pretty much anything you can put in a frame and hang on a wall), mid century style isn’t big on hyperrealism (although it can definitely work) or dark detail-heavy traditional paintings that were quintessential element of the preceding baroque-inspired interior design style. On the contrary, MCM style focuses on contemporary pop art. Just think of Andy Warhol or Jackson Pollock.

But, you can just as easily go for other art forms. Wall art crafted out of wood, glass or metal was exceptionally popular during the 1950s, so these works can definitely find their place in contemporary spaces decorated in mid century modern style. Many of these come with a certain DIY aesthetic and elements borrowed from the iconography of the space age and brutalism, while others play with kitschy vibe and modernist representations of ordinary objects or very often animals and plants. This same approach can be found in different sculptures such as those designed by Harry Bertoia and these are definitely very popular and can be great additions to your stylish home.

But, how can you tie all these different mid century modern interior design elements in a coherent whole? This is the main consideration of this style and even if your furniture and color choices are flawless and you got your hands on the most iconic mid century modern art pieces, this is no guarantee that your home will be transformed into a mid century modern house interior in no time.

Most of the expert interior designers specializing in mid century modern style agree that with this approach to décor you can use any place and any element as a starting point. So, you can begin with any piece of furniture that you need and then continue working around it. If it is a chair, sofa or a table, getting your hands on something with wooden legs is always a good option, as natural vibe that stems from the use of wood is something that is a must in any mid century modern home interior. These can be matched with the wooden floors and window frames to round up the flow.

Streamlined, simple, yet elegant furniture is a must and this is a topic for itself that we have tackled in depth at various places on our website. Another furnishing detail you should keep in mind is lighting. Mid century period played a crucial role in shaping what is thought of as contemporary lighting, so choosing your mid century modern style lamps is also something that should be high on your list of priorities.

Due to its timeless elegance and unwavering popularity, you can easily buy mid century modern furniture in various shops, online stores and auctions. Many of the original manufacturers are still in business, decades after their brand names became famous, and auctioneers just love offering some of the truly vintage, well-aged designs to their customers. But, on the other hand, both of these options can end up with a significant hit on your valet. So if you want to avoid that, you might be interested in looking for mid century reproduction furniture which is often available at a significantly lower price.

However, when going down this road, you have to be careful and do all you can to avoid low-quality replicas and cheap knock-offs. You should always make sure you are getting your mid century replica furniture from a trusted expert in the field. Here at byBESPOEK, we strive to offer our customer premium reproductions of the most iconic mid century modern designer furniture. Not only do we pay special attention that our reproductions match the originals in every detail, but we also utilize the cutting-edge industrial processes and most up-to-date advancements in the industry to ensure quality that will last for decades to come. 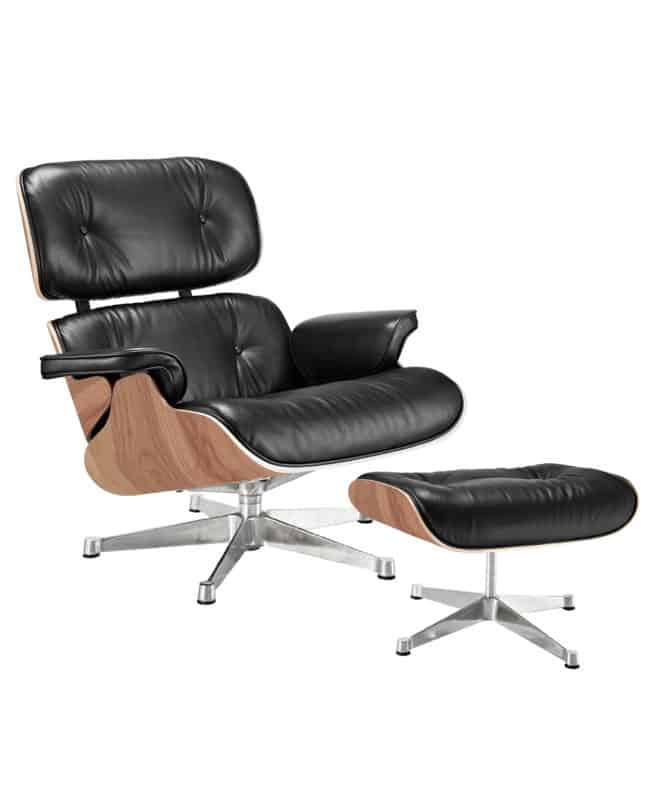