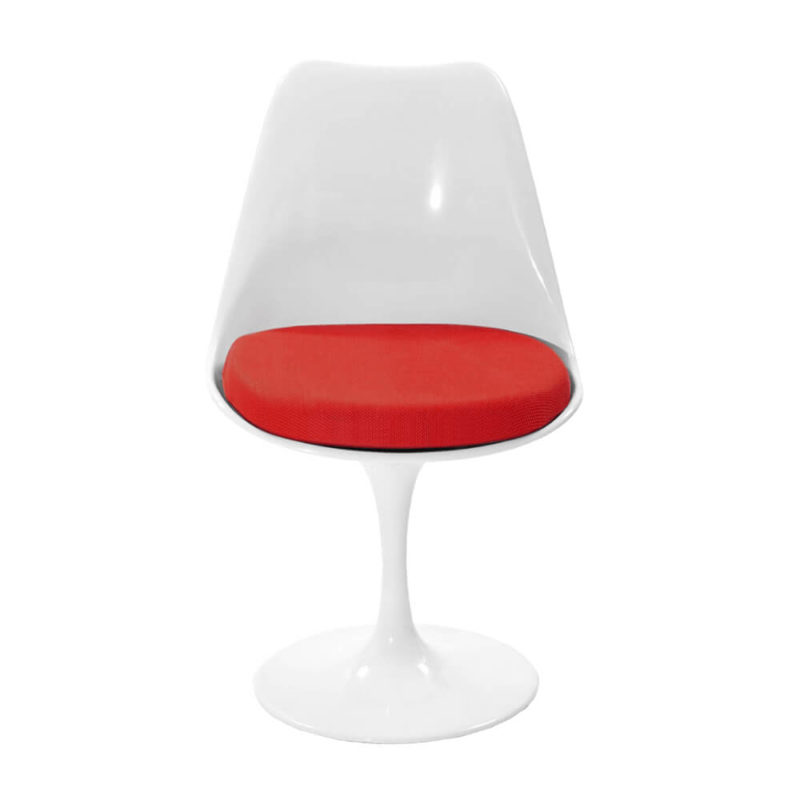 Imagining the future of furniture design

Developed over the period of two years, 1955 and 1956 for Knoll, Eero Saarinen’s Tulip armchair is a true gem of modern design. It has been called a classic of mid-century dining room furniture design, an example of minimalism, icon of modernism and a chair for the space age, but even without all the classifications and praises, Saarinen Tulip armchair has certainly been revolutionary at the time it first appeared in the modern markets and its cutting-edge aesthetical expression still catches the attention today, in the living room and dining room alike.

A true icon of technological progress and the interplay of these processes with the lives of the ordinary people, this modernist masterpiece shines with a unique retro-futuristic glow that has never again be so perfectly embodied in a dining chair. Rich in stylistic expression and design philosophy of its maker, Saarinen Tulip chair is still highly sought-after all over the globe. An integral part of quintessential dining set, as described by Florence Knoll, Tulip armchair has become almost a must for any home decorated in modernist or industrial interior design style with a nod towards innovative Scandinavian-style dining chairs. It is available in two main versions – Tulip dining chair (also known as Saarinen Tulip side chair) and Tulip armchair which has a slightly modified shell to include armrests. A matching dining table in the same style has also been designed alongside the chair Saarinen can thank for for his international fame and recognition.

Clearing up the clutter from your modern home

Eero Saarinen, the creator of the instantly-recognizable Tulip dining chair himself said that his primary goal when creating this design was to “clear up the slum of legs” and clear up the “ugly, confusing, un-restful world” of the undercarriage of chairs and tables. The designer firmly believed that the new modern age required a rethinking of a modern home along the lines of simplicity, functionality and pragmatism. The multitude of legs he kept noticing in the traditional furniture led him to believe that an important step along this road will be to clear up the ensuing clutter. This is the most crucial part of the Tulip chair history.

With his Tulip armchair, Saarinen aimed to do exactly that. Instead of conventional four-legged support, Saarinen developed a new kind of dining chair with a single cast aluminum base and acrylic chair shell. And while Saarinen’s vision of a modern home without the clutter of legs never quite became a reality, the steps undertaken in that direction with his Tulip armchair are still appreciated today. In fact, many interior design enthusiasts still rely on Saarinen Tulip armchairs in order to make the room more spacious by “clearing up the slum of legs”, just like the designer envisioned more than 60 years ago.

A modernist expression in futuristic form

The vintage Saarinen Tulip chair was born from the desire to produce a chair in one piece, but this goal eventually had to succumb to the material restrictions of the day. Because of this, Saarinen Tulip armchair is still produced in two parts colored and connected in such a way that the chair appears to be a single piece design. The shell of the Tulip chair original is made out entirely of molded fiberglass (with a seat cushion) while the base is cast aluminum with rilsan finish which masks its true material, making the chair appear as if it was made out of a single piece. The upholstered foam cushions characteristic of the Saarinen Tulip armchair are actually removable and are connected to the shell with the use of Velcro tape, which makes them easily replaceable.

Here at byBESPOEK, we remain dedicated to reproducing the most iconic pieces of mid-century design and Tulip dining chair designed by Eero Saarinen was high on our list alongside more conventional classics such as well-known Wegner CH24 dining chair. A truly modernist chair which aged into retro-futuristic aesthetic so commonly associated with the space age is perhaps one of the most unique designs in our offer. Borrowing from dining chairs and lounge chairs alike, this iconic model in both of its variation continues to impress to this day. The manufacturing techniques originally used for the production of Saarinen’s Tulip dining chair have been significantly improved and developed, allowing us to significantly cut the production costs, while retaining the same unique expression and quality of the original.

And while the advent of new materials and technologies could allow us to make Eero Saarinen’s dream of solid one-piece chair a reality, we opted to remain completely faithful to the original Tulip chair. A true masterpiece which got a completely new aesthetic expression in modern day, Saarinen Tulip chair reproduction by byBESPOEK will bring to your home this unique touch rich in history and design philosophy. As such, our premium reproduction is not just an essential part of modern dining set, but also a monument to the ever-evolving philosophy of furniture design.

Unlike many Tulip chair replicas and knock offs on the modern market, our premium reproductions are developed in such a way that every step of the production process is carefully planned in such a way to optimize the production procedures and reduce the costs, allowing us to keep our price affordable. Our models also retain the same dimensions (including the seat height) as the original and are available in numerous colors with classic white and black still being the most popular.

White Tulip chair is the standard form of the model – when talking about the shell. The colors of Tulip chair cushions can vary significantly. While this model is maybe not as versatile as some other designs in our offer, that is so only because of its strong and one of a kind aesthetical expression which allows it to act as a very powerful statement piece. Tulip chair cushions are easily replaceable, so if you are not pleased with the original color you got or if you redesigned your home in the meanwhile, you can easily change the vibe of your chair without having to purchase a new one. While the original dark red shade is still highly sought-after, orange Tulip chairs became increasingly popular in the recent years which hints at their integration in numerous contemporary interior design styles. Tulip chair in leather is also available at some retailers, but this variant has yet to match the popularity of models which are closer to the original.