Our premium reproductions of Arne Jacobsen’s iconic Series 7 chair can bring mid century modern elegance and vintage appeal to your dining room in a blink of an eye. 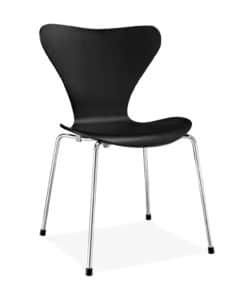 One of the most recognizable mid century modern dining chairs, Series 7 by Arne Jacobsen is a true gem of furniture design. A cousin of the Ant chair, it is a design based on a combination of molded plywood shell and elegant and sleek steel legs. With its fluid lines and vintage appeal, Series 7 chair has been highly sought-after for decades, ever since it first appeared on the global market. This, in turn, also increased the demand for Series 7 replicas, some of which can be even found in the big companies such as Ikea.

Instead of these questionable Series 7 knock-offs, we decided to provide our customers with premium reproduction of this iconic model. In other words, here you won’t find you average Series 7 replica, but designs which have been manufactured using a combination of cutting-edge industrial processes and traditional craftsmanship in order to ensure unprecedented quality at an affordable price.

Our premium reproductions of the iconic Series 7 dining chair designed originally by Arne Jacobsen include a variety of different models so you can choose the one that fits your décor preferences perfectly. Series 7 chairs for sale here at byBESPOEK come in a number of colors, with white Series 7 and red Series 7 being among the most popular options. When it comes to Series 7 upholstered models, comfortable and cozy wool is somewhat more popular than elegant and sophisticated leather, but we can proudly say that both models are getting some well-deserved attention.

The story of Series 7

Series 7 dining chair (or side chair as it is sometimes called) has been designed by famous Danish designer Arne Jacobsen in 1955. Originally manufactured by Fritz Hansen & Son, it quickly became their bestselling design that was produced using what was at the time revolutionary method of pressure-molding the wood veneer in multiple directions at the same time. After the shape was done, different types of upholstery, colors and finishes were applied. As always, Jacobsen kept functionality in mind at all times so he made sure that the final product will be not only elegant, but also comfortable due to its ergonomic curves and also stackable and lightweight. Its immense initial success was considered by many to be the very beginning of the global success of Scandinavian and more specifically Danish mid century design.

As mentioned, due to immense popularity of Series 7 dining chair in all of its models and variants, a surge of replicas and knock-offs flooded the modern market. This is so in part because the original Series 7 price is rather high, even when we don’t count in the shipping costs from Denmark. Today, you can easily find Series 7 knock offs on sites such as eBay and Amazon, but also in numerous stores near you.

Here at byBESPOEK, our Series 7 chair premium reproduction is on sale for a very affordable price thanks to our unique approach to replicas. We take great pride in the quality and durability of all our designs and the same is true for Series 7 side chair. On top of that, it is virtually indistinguishable from the original, not just in basic dimensions, but also in every detail, every curvature and every angle.

Is Series 7 the best dining chair for me?

Well, why trust us – just take a look at our collection and decide for yourself! Of course, we are always here to give our customer all the help we can and that goes for stylistic choices too. So, let’s take a look at how can you style your dining room with the iconic Series 7.

With its almost minimalist silhouette and typical Danish appeal, Series 7 is a perfect addition for all dining rooms that take inspiration from the mid century modern style, whether it is predominantly Scandinavian, American or maybe with a modern twist. Upholstered Series 7 can be even more versatile as the vivid colors and cozy appeal can also make it a perfect choice for those homes that are decorated in more traditional manner, or even maybe boho chic – if you feel like pulling this combination off. Last but not least, as Series 7 chair in whatever color will be stylish but unimposing, this model can be a very clever choice for eclectic style, especially so if you already have some statement pieces which will take the center stage, but which need some stylish furnishing around them to make them really pop-out.

White and black Series 7 chairs are especially popular for more stylish and elegant dining rooms (although red variants can also be used as accent pieces here), while natural wooden colors are usually utilized in less formal and more relaxed ambience. But, you can also make the best out of both – why not combine wooden un-upholstered Series 7 with some stylish cushions or chair covers for a bit of mixing and matching? Thanks to versatility of this classic, the possibilities are endless.

Even if you weren’t familiar with the name or the history of this classic, you certainly saw Series 7 before – which isn’t surprising since just in 1955 when Jacobsen completed this design, more than 5 million of them were sold and the demand just kept increasing – for all Series 7 colors and upholstery types. This inspired a number of variations on the basic form of the chair, including complex under-constructions including castors and swivel bases. Series 7 barstool variant is also available, albeit it never reached the popularity of the original Series 7 dining chair. However, variant that certainly got some attention was Series 7 with armrests which might be less suitable for dining room (unless Scandi dining chairs with armrests are what you were looking for), but which add a whole new layer of versatility to this iconic Danish classic. Overall, Series 7 manages to retain its popularity throughout the years and it is still significantly more sought-after than the most extravagant mid century designs such as retro-futuristic Tulip chair for example.