Shell chair originally designed by Hans Wegner is truly a design ahead of its time. Now, you can get your own Shell chair premium reproduction at just a fraction of the original price. 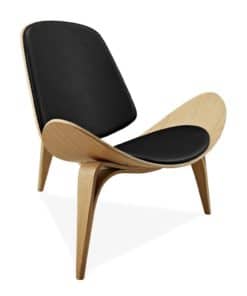 A bent plywood masterpiece, Hans J. Wegner’s Shell chair, designated as CH07 is a true icon of Scandinavian mid-century design. With a sculptural form that is undoubtedly modern in style, yet produced out of natural materials, CH07 embodies all the qualities that made Scandinavian mid-century design so well-known throughout the world. With solid wood structure based on molded plywood, this mid 20th century design is a perfect addition for your modern dining or living room if you are a fan of raw natural beauty of wood and simple elegance typical of Scandinavian design.

The unconventional aesthetics and playful, yet organic curves that make Wegner Shell chair so easily recognisable do nothing to diminish the exceptional comfort that marks all of Wegner’s designs, but is further emphasized here with smoothly curved seat. These same qualities can now bring a unique stylistic touch to your home with our Shell chair premium reproduction. The exquisite comfort and exceptional style are now within your reach – and at just a fraction of the original price.

An exceptional design ahead of its time

Originally designed by Hans Wegner in 1963 for Carl Hansen and Son, the Shell chair received a rather mixed response. Praised by critics for its bold expression and unconventional aesthetics, yet not truly accepted by public because of these same properties. However, when it was re-released in 1998, the Shell chair was a major success as the more modern audience responded with utter fascination by the sculptural form and unconventional shape. By this time, of course, the global audiences were already more than familiar with Wegner’s more conventional designs, including both his dining chairs and lounge chairs with a more conventional aesthetic, such as Papa Bear or Teddy Bear chair.

The development of new interior design styles and liberation of aesthetical self-expression set a perfect stage on which Wegner Shell chair could truly shine and achieve amazing success.This classic design from Denmark was quickly recognised by critics and somewhat later by the general public alike, becoming highly sought-after. Today, the iconic Shell chair can be found in countless stylish homes all over the globe, as well in hotel lobbies and high-end cafes and restaurants. But, don’t let the unconventional shape and three-legged base fool you – Wegner Shell chair is as comfortable as any lounge chair from the mid century era out there, but at the same time rich in history. Because with smart design, comfort and aesthetics don’t have to collide. Statement piece in your home can provide both impeccable style and unprecedented comfort.

Functional piece of art for your home

Aside from exceptional comfort and full back support, Wegner Shell chair is also marked by the surprising lightness that stems from a clever use of natural materials. With numerous curves and arches that dominate its sculptural form, Shell chair relies on compression-moldedwood veneer to achieve an organic and flowing form which is at the same time very light and based on a limited number of elements.

The tapered legs shaped along the same arches perfectly match the overall flow of the Shell chair’s form, while at the same time providing stability. The back legs of the chair are uniquely shaped in line with the Wegner’s belief that there should be no back side to a chair – instead, it should be equally beautiful from all angles. The end result is a sculptural form, a true piece of art which will add a unique stylistic touch to any room, regardless of its position.

A perfect reproduction – for demands of a modern customer

Wegner’s Shell chair certainly aged well. As mentioned, its revolutionary potential became recognise only decades after it was originally designed. So it seems like not much can be added to it. Instead, we focused on further improving the manufacturing process in order to eliminate unnecessary costs and significantly reduce the excess material. The result is a premium Shell chair reproduction that retains all the qualities of the original, including the style and comfort as well as functionality, while at the same time being available at just a fraction of the original cost.

Quality made to last for decades

With the use of highest-quality materials, we ensure that our customers get an accent chair that is built to last. Only highest quality wood is sourced for the development of the shell and the leather upholstery is obtained only for the best suppliers in the business. The result is a design that, we can safely say, will last for decades to come, without losing its timeless appeal.